Flavours are not what they seem: sensory complexity and cross-modality of the perceived taste

Have you ever wondered what makes you taste things the way you think they taste? Did you ever find yourself in a situation when you cooked at home something you enjoyed at a restaurant a few days before, and it didn’t taste the same?

Well, I definitely did, and that made me think it's because my cooking skills are not on par with a chef's. Which is obviously the case, but it also turns out there could be other factors in place. And that’s precisely what we'll try to uncover today. Let's start with our senses.

Five human senses and their impact on taste

It is well-known we, humans, operate based on five basic senses: taste, smell, sight, touch and hearing. If I asked you which one is responsible for the flavour perception, and you responded – 'Taste… *duh*' – you’d be wrong.

You probably already know about the basic flavours our taste receptors can distinguish – sweet, bitter, salty, sour and umami (an additional one – fat – is being debated in the scientific community). What you might not be aware of, is that they are responsible only for a fraction, about 20%, of the perceived taste itself, or what we think of as ‘taste’, to be more precise.

Aromas are where the majority of our perceived gustatory sensation comes from, as taste buds don't generate enough information for our brains to create a complete flavour image. Don't believe me? Try tasting something while pinching your nose and tell me how it feels. The same applies to when you get a blocked nose.

Once our olfactory receptors catch those particles, they transfer the received information to the olfactory part of our brains and provide us with additional flavour information.

Now, here's where it gets interesting. You've probably heard of colours having an impact on the perceived taste of food and drinks, and if you didn't, well – here you go. Not only colours, though.

Visual stimuli are complex, and pretty much anything you see can make something taste either better or worse. I'll go through a couple of examples and studies further in the article. For now, I'll leave you with a simple invitation to look for the answer as to ‘Why food often tastes better at a restaurant than at home?’ somewhere in this section.

We typically think of tactile feelings as of touching something with our hands, or skin in general. And while that does impact the end-result of how food and drinks taste (eg coffee cup’s surface texture), you shouldn’t forget our tongues, lips, or the entirety of our mouths for that matter, can also feel touch.

Biting process, food’s chewiness, temperature, texture and consistency – all of these can either make or break even the most masterfully crafted dishes and beverages.

Last, but quite frankly, not least – sounds. Have you ever noticed that crisps commercials tend to focus on the crunch of the snacks they're trying to promote?

It is because the sound also contributes to how we perceive what is in front of us.

Coca-Cola, for example. They often focus our attention on the fuzziness of their carbonated drink. And while you might think it's not that important in the grand scheme of things, this is precisely why I'm starting this blog. To show that even the smallest details are what makes our mundane experiences special.

Underestimating the cognitive impact of that fizzy Coca-Cola sound or a crisp’s cracking doesn't mean it is not affecting our subconscious. Speaking of which…

In a 1996 study by Pamela Dalton, titled 'Odor perception and beliefs about risk', it was found that external information can influence our perception of odour. When the study participants were told that the odour present in the room was 'healthy' and 'natural', they showed adaptation and positive reaction. When told it was 'hazardous' – sensitization and negative reaction to the same odour was recorded.

Have you ever been to a wine tasting? Do you remember yourself struggling to identify what the hell is in the aroma or the taste of the given wine? Until someone yells, 'STRAWBERRIES!', and you're like, 'OH, YEAH, STRAWBERRIES!'

That's precisely the mechanism we just talked about.

Patterns and prior experience

Our brains also seem to have issues with processing taste when the stimuli break expectation patterns. This is something I found out by pure coincidence when I was a little kid. I never really tried to understand it, but the answer came to me in the midst of my research.

One day, I was too lazy to use a spoon to eat soup my mom cooked for dinner. Instead, I decided it is a smart idea to use a straw. I'd be able to finish much faster without the need to deal with the whole spoon business. The first portion of soup that got into my mouth through the straw made me realize what regret tastes like…

We're used to associating straws with sweet drinks, so when I tasted soup instead of the subconsciously anticipated sweetness – my previously learned taste patterns were sent all over the place. At that point, it was imminent that my brain processed that soup flavour as something disgusting. When in reality, after I switched back to eating it with the spoon, it tasted as good as always.

This concept of playing with minds can be successfully used in a gastronomy industry to offer new and unique experiences to the customers. If you're working in a restaurant, café or a bar – it's not the worst idea to experiment with breaking expectations of your visitors.

Silvia Peleteiro discusses this concept in her paper titled 'How our senses interact: the concept of cross-modality'. Research shows that human senses are not separate systems. Parts of our brain that process different stimuli use each other to produce more complete end-results, as the information from one can greatly influence the work of another and vice versa.

As we've already established, visual stimuli affect our perception of taste. Let's have a look at a specific research that I find fascinating.

Conducted in 2020 by Yang Chen and his associates, a study titled 'Assessing the influence of visual-taste congruency on perceived sweetness and product liking in immersive VR' embarks on a journey to test the impact of our environment's visual influence on the way our brain processes taste.

But before we dive deeper, let me mention a couple of relevant concepts.

Shapes are proven to influence taste on many levels. For instance:

The battle of three environments

In the aforementioned study, participants were placed into three differently designed rooms using a VR headset and were given the same (which they weren't aware of) sweet drink (concentrated grenadine syrup diluted with water at a 1:7 ratio based on the producer's recommendation). The beverage was served in white plastic cups and was drunk through a plastic straw, with a palette cleansing procedure in between the tastings.

The selected environments were designed as follows:

After the experiment was completed and post-drinking surveys were conducted, the results stated that the sweet-congruent environment indeed had an impact on the taste, producing a significant effect on the perception of sweetness of the tested beverage.

These findings can be of special business value to those who want to open a venue that serves sweet desserts and, for instance, would like to offer healthier alternatives. Using interior design to ‘fool’ your customers' brains with visual stimuli that boost their perception of sweetness, instead of simply adding more sugar, might not be the worst idea after all.

As you see, our taste perception is a far more complex process than we tend to believe. Understanding how our senses cooperate opens up countless possibilities for experiments, especially if you love cooking or simply enjoy food and/or drinks.

That’s it for today. Hope you enjoyed our little journey. One of the goals of mine for starting this blog is to show how miniscule details can produce mesmerizing experiences. I’m a firm believer that introducing small rituals, like selecting a specific environment to enjoy our Saturday’s coffee, can make our lives just a tiny bit more fascinating. Many of us get stuck in the mundanity and forget how amazing the world is. 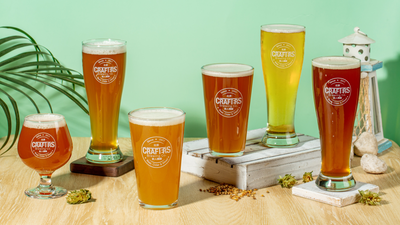